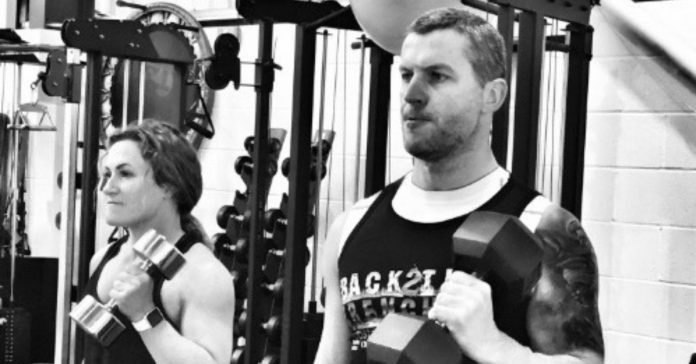 ONE of the members at Core Results took a look at Sue, Kari and Ross on the first day this week and asked me, “Why are they doing this [the Amazing 12]? They already look amazing.”

Not a bad compliment really, considering we had just started week 5 and there’s another seven to go. Kari was on Cloud Nine this week. For the first time in her life she discovered she had biceps.

Biceps are not the be all and end all, of course. But it was more symbolic of how her body composition has so obviously changed and that she had noticed.

“Feeling on top of the world this morning,” she said to me the next day. “Starting to feel like I am taking shape. Absolutely loving this process.”

What’s interesting, though, is that at the beginning of the week, just for a few moments, she had felt almost the opposite. After one movement we were training, she didn’t feel as if she had done particularly well and said to herself, “Pathetic.”

It got me thinking about self-talk and how we encourage or discourage ourselves mentally. Everyone is different. But, more often than not, you’ll find successful people are those who have positive self-talk, don’t berate themselves and quickly move on. It’s a skill. You need to practice it. You need to first become aware of it. But realise also that doing the opposite – putting yourself down – is a skill as well. What you practice the most will likely stick and become your default action.

Training doesn’t stop with exercise or the physical side of our being. We are training the mind as well as the body. That’s why Sue said, “the Amazing 12 tests your metal as well as your muscle.” It’s true.

The Amazing 12 is the same. My trio has been experiencing a lot of emotions and challenges. Ross has had a particularly difficult week. He missed a couple of sessions through being ill. He still doubts the process will work on him.
“I know how my body works and I just don’t think it [the A12] will work,” he said.

One of my A12 colleagues, told me of one of his recent graduates – a 56-year-old (pictured above).

His results were outstanding, as you can see. Yet Phil told me that after nine weeks this client had come to him, patting his belly, saying “it ain’t shifting”.

Phil told him what I keep saying to Ross: “Follow it to the letter and you’ll see.”
Self-doubt is often self-defeating. There is a very strong link between what goes on in the mind in relation to the body.

But I will keep working on Ross. He is getting undoubtedly stronger and fitter. He has so much potential. I see changes to his physique and I know what lies ahead.

“Just keep doing what I ask you to do and it will happen,” I reassured him. But, for now – until Ross really starts to believe – I am working against his resistance. We’ll see what happens.

Ross and Sue even shook hands on a friendly bet because Ross didn’t think he’d get into great shape by the end. Sue wagered £10 that he would, with the money to go to charity.

Sue has been solid and consistent, though still juggles her training around work, raising two children and family life.

Kari has been flying high. “I’m excited to find those unexplored depths of my lifting potential,” she said. “Thank you for helping me perfect my lifting technique and making me believe in myself more.”

Put it this way: at the end of the week, when she should be more tired, I had Kari do exactly the same workout as the one which made her say “pathetic”. Her performance, however, had improved DRAMATICALLY by making just a few tiny tweaks.

And Sue tested out her pull-up at home one night (and take into consideration she hadn’t tried one in a long time – well before we started the program). Although she’d managed a pull-up in the past, it was always a struggle. However, Sue told me this week it came easily, so easily it surprised her.
The best of this program is yet to come.