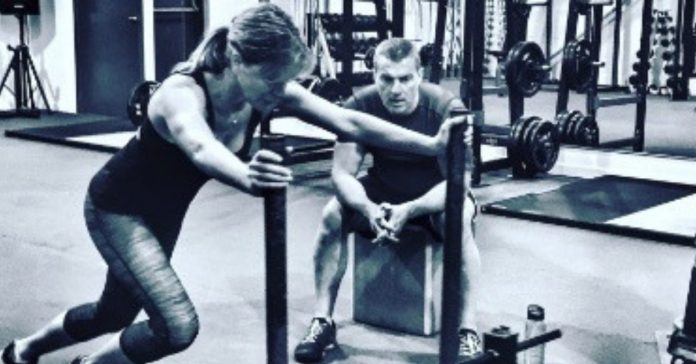 IN her CrossFit days, when Sue completed her heaviest deadlift, she remembers it being a struggle – the type of lift where you are dragging the bar slowly up your leg, shaking and grimacing and groaning at the same time. It wasn’t pretty.

Fast-forward roughly a year and to this week, just beyond the halfway point of the Amazing 12, and Sue managed multiple deadlifts with a weight that was fractionally less than the 1-rep max she achieved 12 months ago. She did a victory dance, of course, to celebrate.

These were not ordinary multiple lifts either. Sue did them all pretty easily, which confirmed to me there is plenty more in the tank. And she executed the lifts with good form.

Later that same day, Kari had a similar experience with the deadlift. And she, too, took the bar to standing multiple times, using sound technique (although there’s a few things I want to still work on with her) and a weight that was only marginally less than the best she had ever lifted. Kari, being tall and lean, isn’t built for the deadlift, which made it even more impressive.

So the progress – measurable and visual – is all becoming evident and being achieved without going close to excessively overloading the body.

That’s not to say the Amazing 12 is easy. Far from it. Ross said this week, “I can feel it’s getting tough now. I feel like this is when the [real] hard work is going to start.”

The more I coach this program, the more I appreciate the beauty of the process. If I had asked Sue and Kari in week 1 to do those deadlifts, the chances are they would have either failed or hurt themselves or struggled or looked at me nervously.

Success with lifting is as much about confidence as it is strength. We all possess the strength, but it’s difficult to manifest it when our heads are filled with doubt or fear and our bodies under-prepared. So to see Sue and Kari lift so effortlessly was satisfying to see. It tells me how much they are beginning to believe in themselves and how far they have come.

“I have learned over the past seven weeks I have more gritty determination and willpower than I thought,” said Kari.

“My engine is stronger than I ever gave it credit for. I am learning to fuel my body with the right foods and regular meals. Food no longer scares me.

“And it’s not only okay for a woman to lift. I think women SHOULD lift. It’s a fantastic sensation and creates fab, toned muscles.”

Ross, whose arms and shoulders are becoming like sandbags, still has plenty in reserve. He really struggled in week 1, but his strength has returned at an astonishing rate and the best part is that his technique gets better the greater the challenges I throw at him.

He joked “I never doubted you for a minute, you know, Claude. I totally believed you from the start.”

Of course, here’s a man who only a few weeks ago was teetering on the edge because things weren’t shifting fast enough for him. He was struggling with aspects of the diet. Everything got on top of him. But you wouldn’t recognise him now.

“I have really learned how to listen to my body,” Ross told me. “I rest when I am tired, drink plenty, eat the right foods and stop training when in pain.

“I’ve always had a die-hard attitude to life and this was evident in my CrossFit days. But now I value my body and, at nearly 47, I take greater care of it.

“Much like the care I give others [as a paramedic], I now give to myself. If I need a snooze, I no longer feel guilty, but look at it as my body saying it needs a break.

“So I’ve had a change in mindset which I feel will be better for my long-term health.”

Ross’ outlook becomes more positive with each week. He keeps us all amused with his jovial humour and knowledge of trivia. He’s now exploring what his next challenge will be after the Amazing 12 and talking about doing it again next year.

Sue’s also been assessing how she wants to move forwards – training and living.

“I have learned from doing the A12 I can adapt. Not easily [as I don’t like change], but I can do it if I need to – like drink my coffee black and eat tuna for breakfast. I may not like it, but it can be done.

“Things you thought are never going to change, can change. This makes me feel stronger more than the fact I smashed my PB this week. Now I know I can adapt.”

The A12 has also reinforced what she knew about herself – “for example, how once I focus I’m like a laser beam. I still surprise myself at how dedicated and focused I can be.”

All in all, aside from Sue pulling a muscle in her shoulder, it was a demanding but smooth week. Having injured herself badly previously, Sue obviously feared the worse.

But she was back in training the next day none the worse for wear and declaring with passion, “I’m not missing a session!”