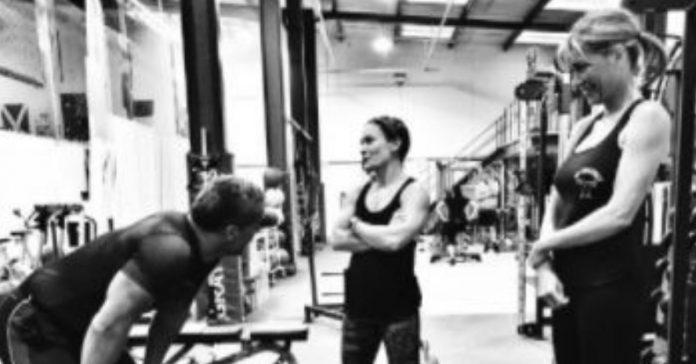 The opposite can be true also – that movement can alter your attitude, which is why many people do exercise or train.

Kari, Ross and Sue, who are training with me on the Amazing 12 at the Core Results gym, are all contrasting personalities with different mindsets, jobs and lifestyles. It’s been interesting to observe their ups and downs, how they face challenges, how they impact on each other and how they have adjusted to the program week by week.

I call Sue “high maintenance with humour” and I mean that in the nicest possible way. Kari is steady, but has moments where (metaphorically) she beats herself up. Ross is up and down. When he’s down, he’s really down. When he’s flying, he’s like he can conquer the world and will help everyone around him to do the same.

This week, Kari was doing a particular movement that I could see was challenging her. She didn’t get the amount of reps she was aiming for and looked at me, as if to say ‘what’s going on? Why can’t I do this?’

I could see clearly, though, that there was doubt in her mind as she was getting set to start. She was intimidated. We’ve all been there before. Trouble is, the doubt quickly became a reality.

So I asked her, “What was going through your mind as you were about to start?”

She replied: “That I hate this exercise [which happens to be Sue’s favourite].”
Call it hate or fear, sometimes the two can become one. But the bottom line is that Kari was questioning herself and, consequently, virtually defeated before she began. So we had a bit of a pep talk and discussed how to make the mental shift.

I’m not saying it’s easy, particularly when weight-lifting. But remember we become good at what we practice the most.

One of the most impressive examples of mental strength for me is when an Olympic weight-lifter fails an attempt at a massive lift and then, minutes later, comes back to execute it perfectly. That’s real strength.

Kari composed herself and as she stepped up for the next set her body language was different and she proceeded to not just exceed the amount of reps on the movement that had thwarted her minutes earlier, but she tripled it!

This week Sue came up short on one particular movement, but I expect her to trump it next time she tries. Why? Because she’s a fighter and going to be more determined (motivation), she knows what she is up against (experience), she’s will be stronger from the training (adaptation) and we’ll make a few technical tweaks (skill). And if she falls short again, we’ll try once more the week after.

“I bring everything to my training,” said Sue. “The good, the bad and ugly. Training is the time I give myself to be free. It isn’t something I do to keep fit. I do it to stay happy. I never have a problem motivating myself. But it also means I take all my emotional baggage with me. If I’ve had a shit day with the kids, it ends up in the gym. If I have a bad day at work, it ends up in the gym.”

That could be a trainer’s nightmare. But Sue has the ability to use that anger or anxiety to her advantage. “The good news is that I get to work out the stress and frustration,” she said. “The bad news is that my trainer gets it in the neck a lot [sorry, Claude]!”

I’ll be honest. If I don’t believe I can get the best out of someone, I won’t take them on. But I know I can work with Sue. In fact, despite what she has said, she is great to train.

“My saving grace, I think, is my humour,” said Sue. “During the Amazing 12 there have been a few ‘I don’t know whether to laugh or cry’ moments and I’ve always ended up laughing. My attitude hasn’t changed, but my resolve has strengthened – we must all make time to do the thing that makes us happy and allows us to let off steam.”

Kari’s relationship with training is different. She admits she was addicted to getting muscle soreness that comes with training excessively. Prior to signing up for the Amazing 12, Kari had done little training for the best part of four months.

She now thinks it was her body’s way of shutting down, as a way of protecting itself. “I’m convinced that was the case,” she said. “It was like I went into training hibernation as a way to recover.

“I’ve always smashed my body to pieces by over-training. The Amazing 12 has taught me to slow down and listen to my body. In order to perform better, my body needs rest periods and proper fuel.

“My body has also taught me that it’s stronger than I ever thought. My mind has always stopped me from lifting heavy. If the weights looked too heavy or the monkey bars in a race looked too difficult, I would decide I could not do it.”

“The mind still plays tricks during a session now and again [like this week]. So I know not to walk into something with negative thoughts as you would have already failed. ‘Know you can and you will’ is going to be my motto going forwards.”

Ross is still on an emotional roller coaster. He has a demanding job as a paramedic. This week he had to train after attending a nasty suicide. He also has PTSD, which affects his sleep. Often this, when combined with working shifts, leaves him tired when training.

The doubts about whether he will be successful in transforming his body remain. “I’ve struggled with the diet,” he said. “Although my strength has grown, my attitude is, ‘what will be, will be’. I’m doing everything that’s asked, but not getting the results.”

Ross trains hard and I’m excited by what he can achieve in the remainder of the program, but he isn’t seeing the results he has predicted for himself at this stage. Therefore, he still has a tough time believing the Amazing 12 will deliver what he is after. To some extent, it is like he is driving with his brakes on and complaining the speed isn’t quick enough.

I’m still confident he will be singing a different tune come the end of June.

Sue, however, has reached the point that if she were to finish now she’d be satisfied.

“My shoulder [which she had injured a year ago] is now strong again and I’ve got full range of motion back. I am also a better person for indulging myself in this bit of time where I feel me,” she said.

“The Amazing 12 hasn’t just made me physically stronger – I’m happier, healthier and better for my family because of those things.”