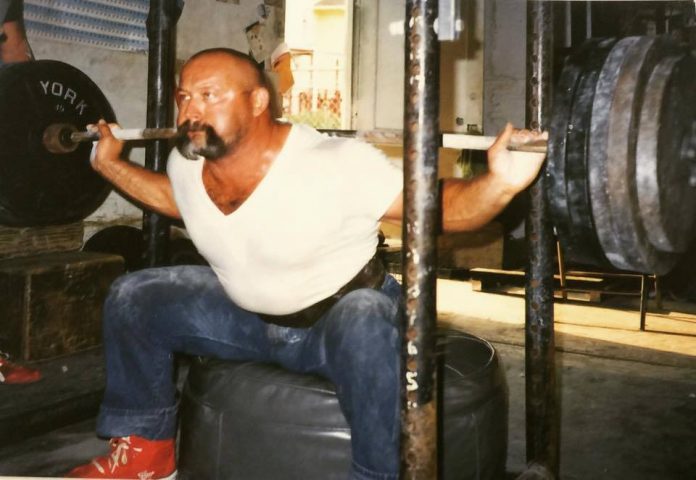 In between chocolate eggs on the menu and biblical epics on the TV, I came across an article from powerlifting coach extraordinaire Louis Simmons as I was scrolling down my Facebook news feed in an almost trance like state, sitting in my childhood home, visiting my Mum for the Easter Holidays.

The picture above grabbed me because it was of a young looking Louis, box squatting some pretty decent weight, onto a leather pouf stool in jeans and a plain white T!

As I began reading, Louis explained how in his early days he would come home from work, anywhere from 5pm to 11:30pm at night and with no warm up, while still wearing his work clothes, he’d train! His ‘gym’ wasn’t exactly state of the art either. Everything was home made and extremely basic…but it got the job done in spectacular fashion as THIS humble home gym was the actual birth place for the now legendary Westside Barbell Club!

One of the points this post was making was that you really don’t need tonnes of ‘stuff’ to succeed (If anything I’ve always found the opposite to be true), a point which later became an overarching one for Louis, as even with all the phenomenal success WSB have had, very little of it has been down to the ‘stuff’ used to train with. But more down to what is done WITH the ‘stuff’ which IS used!

I used to take a similar approach in my early training days (in many respects I still do) and couldn’t agree more with Louis here.

It’s funny, when reading this post from Louis in my childhood home I could look around the room and still see the pouf stool (same as the one Louis was using, only smaller) that me and my friend would bench press off as teens.

It was an altogether precarious affair. You would wriggle into position with space only for your upper back to be supported, your lower back held in midair with feet planted on the floor and your neck held in isometric contraction off the other end of the stool for the duration of the set. Your training partner would then deadlift/high pull the bar into your hands and you were good to go from the there!

I won my first powerlifting competition and broke an NIWLA junior bench press record training like this.

I could also see the kitchen chairs that I built up to doing 320 consecutive push ups between when I was 15yrs old (doing it in sets but resting only IN POSITION on the chairs). I started doing push ups like this because I’d seen a VHS of my idol at the time, Tommy Hearns, training for his rematch with Sugar Ray and he was doing them.

I could see the counter top where at 18yrs old I did my first double bodyweight dip….with the weight plates loaded into a kit bag and bath towels stuffed through the handles so that the nylon didn’t cut into my shoulders.

I also came across the copies of the 1986, 90, 95 Guinness Book of World Records (ironically) that I stood on to do DL’s to make it harder because I couldn’t fit anymore standard 10kg plates onto my now badly bent standard bar.

I saw the door frames that I hung off to do hundreds of chins and pull-ups with only a painful finger tip grip.

I remember the only place in the house with a space free enough and ceiling high enough to do handstand push ups was at the top of the stair case…right at the edge of the stairs! Now, it would’ve taken me to have fallen sideways in order to die BUT…I’ll never forget taking about 20 minutes just to get the guts to kick up into that handstand position the very first time I tried this, I was in my mid teens at the time.

Then we come to the back hall, a space not big enough to fit two people into but it had a SOLID brick wall! So I duct taped a focus pad to this wall above my own head height (to work my shoulders harder) and in a pair of 18oz Lonsdale boxing gloves I started smashing this thing as hard as I could with both hands! There wasn’t space enough to throw hooks but you could throw straight shots all day…and I did! I hit this thing daily throughout my youth. The whole way through my boxing career I was always considered a very powerful puncher, I still believe to this day, that hitting THIS immoveable object helped shape this.

It’s a brick wall 44″ high and as a teenager, coming back from road work at 5 or 6am, I’d run and jump over this wall, over and over and over again before eating breakfast and going to school.

It’s funny, I also remember my days before organised sport where myself and an older lad called Patrick O’Hara would sprint the 10m from the lamppost outside the Brady’s house and jump, landing two feet at once, on top of this same 44″ high wall…when I was 11 years old!

So I really don’t wanna hear “my gym doesn’t have THIS or THAT and that’s why I can’t achieve my goal”.

I remember seeing a picture in a pictorial boxing book, for the life of me I can’t remember the name, but two pictures in this book made a big impression on me early on. The first was of a young kid about 5 years old, very poorly dressed, standing on top of a stool just to be tall enough to hit the speed bag. The other was of a kid from the Dominican Republic, who looked about 11yrs old, standing with his hands up, fists wrapped in odd coloured rags cut into strips to act as hand wraps! The champions of tomorrow are to be found between a rock and a hard place today.

These kids didn’t waste one second thinking about what they didn’t have, because that list was long and they could do zero about it. Instead they focused on what they had influence over…themselves, their convictions and their actions.

The only things you need to get the job done, ANY job, is the heart to endure what’s required and the mind to plan the fastest route to the destination.